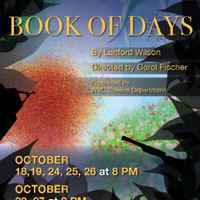 Originally produced in 1998, Book of Days is set in a Missouri town dominated by a cheese plant, a fundamentalist church, and a community theater. After the owner of the cheese plant dies mysteriously in a hunting accident, Ruth, his bookkeeper, begins to suspect murder as she contemplates the details. Being cast as Joan of Arc in a local production of George Bernard Shaw's play, Saint Joan, Ruth is motivated by her character study to aggressively seek the truth. The quest embroils her in the jealousies, religion, greed, and lies of the small community, and the edges of “Ruth” and “Joan” become blurry for both herself and those around her. Wilson is here at his best uncovering the shadowy side of humanity.