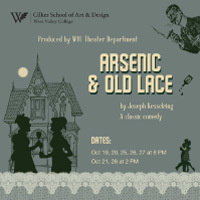 Arsenic and Old Lace is a black comedy written in 1939. Debuting on Broadway in 1941, it ran for three years and over fourteen hundred performances. The plot centers on the Brewster family, a once elite American bloodline that has now descended into homicidal insanity. Mortimer Brewster, a drama critic and the most ostensibly normal of his clan, is forced to cover up for his sadistic kin while being torn between family loyalty and his desire to marry the woman he loves. Exploring themes including family loyalty, nature versus nurture, and whether we can ever truly break away from our family’s influence, Arsenic and Old Lace was praised for its dark, screwball comedy tone with The New York Times theater critic declaring it one of the funniest plays he’d ever seen.